Well, the answer is actually no – rather than generating fancy fonts, this converter creates fancy symbols. The explanation starts with unicode; an industry standard which creates the specification for thousands of different symbols and characters. You can also check our glitch text generator.

“Tags” is a Unicode block containing characters for invisibly tagging texts by language. The tag characters are deprecated in favor of markup. All printable ASCII have a tag version. Properly rendered, they have both no glyph and zero width. Note that sometimes zero width text cannot be easily copied.

This browser-based utility rewrites regular text to random Unicode text. Everything that you write in the text area as the input automatically gets converted into cool-looking Unicode glyphs and is printed in the output text area.

Okay, so how does this relate to generating small text? Well, as it turned out, there were a bunch of people that weren’t too interested in Unicode. They had specific character requirements that Unicode hadn’t accounted for in their initial specification.

The characters that are generated aren’t actually a bold “font”, but rather a set of bold Unicode characters. That’s why it’s possible to copy and paste them (something that you can’t do with normal “fonts”). 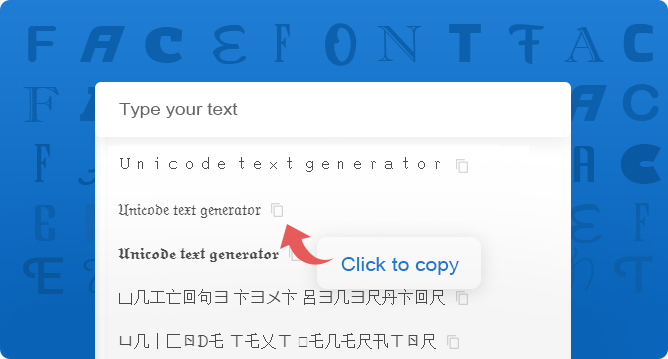 After generating your fancy text symbols, you can copy and paste the “fonts” to most websites and text processors. You could use it to generate a fancy Agario name (yep, weird text in agario is probably generated using a fancy text converter similar to this), to generate a creative-looking instagram, facebook, tumblr, or twitter post, for showing up n00bs on Steam, or just for sending messages full of beautiful text to your buddies.

For example, “Black-squared”, “Small Caps”, and “Stroked” are unique only to letters and “Double-circled”, “Roman”, and “Greek” are unique only to numbers. To make things more convenient, we have added an option that lets you generate all fonts for numbers and characters at once.

Along the way, it picked up a set of symbols which can be used to emulate “small caps” (an alphabet of small capital letters), and a somewhat incomplete set of subscript and superscript characters. So the small text letters that you see in the output box above are just a few of the 130,000+ symbols that are specified in the Unicode standard – just like the symbols that you’re reading right now.