Generate your Cursed Text, copy and paste it into your profile or messenger

Use this web page to generate cursed text letters l̷̳̇ï̶͓k̷̦͊ë̵͕ ̴̜̌ṫ̷͔h̴͍̄i̶̥̕s̶̩͌. You can copy and paste the cursed text into chat messages, internet comments, and all sorts of other places. Distorted text, aka cursed text and glitch text effect generator, is originally known as Z҉A҉L҉G҉O̚̕̚. Zalgo text and demonic text distorter is based on a meme where people add sudden creepy dark void into images and text (art in general). You can also check our glitch text generator. This Zalgo text generator does a great job in converting normal texts into their garbled and distorted form. It’s made up of many Unicode diacritic marks on top of words in languages like French and Spanish.

Zalgo text generator adds symbols on top, beneath, and in the middle of your creepy text. A single character of code can concatenate with multiple “combining characters code”.

Often more than not, we see such cursed text appear in different places across the web however when we wish to copy it and paste it elsewhere such as on different social media platforms like Facebook, Twitter, Tumblr, Youtube, etc we are unable to do so and the creepy text fails to appear in the new spooky font that we want it to.

How Does Cursed Text Generator Work?

Save your time and effort by visiting our online cursed text generator. Writing in a simple font is too boring and with your content being written in the cursed text letters the readers would be intrigued to read it out. 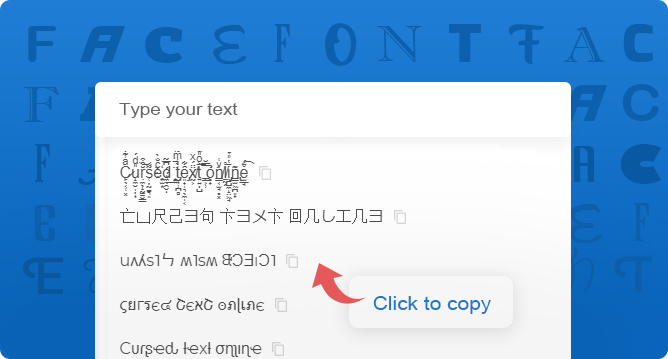 Some website owners of large sites have begun to “crackdown” on this text though because it makes their websites look broken. So if you copy and paste this cursed text stuff into a website’s comment section (or wherever) and it doesn’t work, then that’s probably the reason.

What is Cursed Font?

The curse generator adds symbols on top, beneath, and in the middle of your text. Putting stuff in the middle is discouraged because some browsers and systems that are not as good with text symbols are going to turn some letters into squares then.

This zalgo generator, and all others which produce glitchy looking text that you can copy and paste use these diacritic marks to create the weird-looking text.

The cursed font generator can be used to generate messed up text that can be used on different social media platforms such as under scary videos on Youtube, on your Facebook status, and even in your Instagram posts and captions to give that spooky appearance that would not only look cursed but also scary making it more noticeable than normal, boring text.

The cursed text generator creates slanting text and it suits the profiles with modern content especially if you are posting about action movies or action stuff. If your bio or posts are written in such a text font it would definitely attract the attention of your followers. It is important to produce valuable content and it is equally important to present it in the most suitable way.

Our content generated by a cursed text generator will give your subscribers a breath of fresh air. It could also make your profile alive with engagement graphs going upwards and would certainly boost your popularity online.