This is a simple online tool that converts regular text into cursive letter symbols. The conversion is done in real-time and in your browser using JavaScript.

Cursive fonts simply emulate cursive handwriting, in which letters are usually connected in a slanted and flowing manner.

Cursive text is one type of fun text that along with italic text, bold text, underlined text, and other obscure characters that can be generated from Unicode. They are unique character codes that a computer is able to understand and look cool to human eyes. 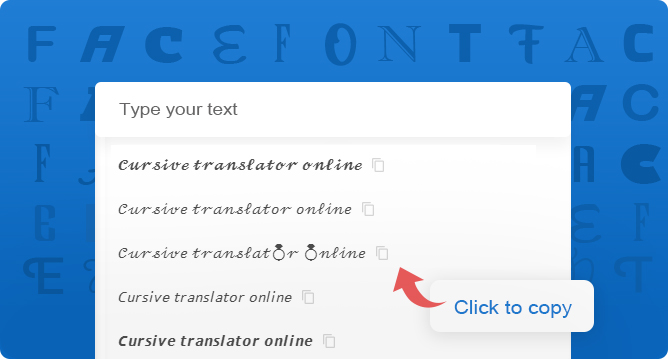 Cursive font has been an important part of writing for a very long time. There are multiple scripts out there for the cursive letter which go back as far as the fifth century.

How to write cursive translator

You’d be forgiven for thinking that this translator converts text into a different font – that’s not what’s happening here. So how does it work? Unicode.

The term “font” actually refers to a set of graphics that correspond to some or all of the Unicode glyphs. You’ve probably heard of “Comic Sans” and “Arial” – these are fonts. What you’re copying and pasting above are actually symbols that exist in every font. So the cursive text and other fancy letters that you’re seeing above are actually separate character, just like “a” and “b” are separate characters.

Back in the eighth century, an English monk was ordered by Charlemagne to design a standard set for cursive writing generator which would comprise of word separation, lowercase letters in cursive as well as punctuation.

The cursive text adds to the beauty of any text making it look more visually pleasing than a normal, boring font which would not stand out in any way. By using the Emily in cursive letters generator, you can enhance the beauty of your social media presence as well as other correspondence and art.